The last year has been... quite the binge on theatre! And as we are more than happy to wrap a very successful year, full of firsts, it also leaves us with a little heavy heart to know the year has come to an end.

But moving on... We have our team for the next year in place and we will be announcing it soon! So, please stay tuned!
In other news, on 28th March, 2020 (Saturday), 4:30 PM, we are hosting our first ever online open house on ZOOM! Because it's online, and it's a first, we can only allow for limited participants based on first come, first serve.
So RSVP and register NOW!

April started with two shows as part of Thespo at Prithvi - Trikon ka Chautha Kon and Bhanvar. The audience turn out and response was good.

In mid-April, we concluded our Natyakala workshops with an exciting workshop in Mumbai with Abhinav Grover. The participants learnt the dynamics of the body, voice, imagination and work on Navras through Yakshagana. 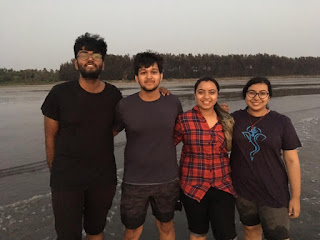 At the end of the month, we went for our annual off-site with the new Fellows, for a quick recap of Thespo years gone by, along with discussions and debates. The Thespo Fellows for 2019-20 are Nishika, Sameer, Anushka and Shubham.

As we say good-bye to Thespo 20, it's the start of a new decade as we step into the 21st year of the youth theatre movement. We received an amazing response to our recruitment campaign from all parts of the country. After several rounds of emails and meetings and skype conversations, we have finalised the team of Thespo Fellows 2019-20! The names will be announced very soon!

At the start of April, Thespo At Prithvi features two hindi plays:
Trikon Ka Chautha Kon (2nd April, 5pm & 9pm)
An original story about plagiarism. When Rajnandi is accused of it, she confronts the other two authors who are supposed to have written the story before her.
Bhanvar (3rd April, 7pm & 9pm)
Story of Bhanvar Singh, a quirky night watchman. A migrant to the city, he is entrusted with the security of an abandoned factory. It is his last day at work, and yet, his shift never seems to end. As the night grows ever longer, he shares his hopes, dreams and reality with his invisible superior, often blurring the lines between truth and imagination.

The last leg of Natyakala 2019 will conclude with a workshop in Bombay on 14th April, details for which will be out soon.

In the 18th edition of ThespoINK, our quarterly e-zine, we have recapped what you might have missed at Thespo 20 and some wonderful articles; do have a read.