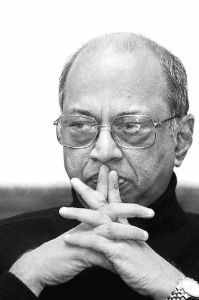 Long over-due and should have been awarded in 1980.

In 1999, when the playwright Satish Alekar and his motley gang of Chandrakant Kale, Mohan Agashe, Ramesh Medhekar re-joined forces for a re-run of Begum Barve, no one knew quite what to expect. They weren't even sure themselves. The bored babus, Jawdekar and Bawdekar, and of course Begum Barve (the wannabe from the Sangeet Nataka era), had enjoyed huge success. The play was theatre history. In end-2008, once again, the play received tremendous adulation. It was a triumphant return. The Gang of Four were back!

Begum Barve proved, yet again, that its perhaps one of the best play-texts to emerge in this land. A close contender would be Mahanirvan, again by Alekar. Two of my favourite plays.

I say this, because Begum Barve and Mahavirvan are the two reasons I believed in theatre and even today when one is wracked with skepticism and existential malaise, the two plays remain a ray of hope, even as the rest of the edifice is withering away, hopelessly.

Begum Barve like Mahanirvan is a play in which is tinged by multiple uncertainties and a peculiar mixture of hope and melancholy and music. One of the strengths of Begum Barve's remarkable tale is that it acknowledges the myths (and Alekar's own mischievous myth-making) while trying doggedly to get to the facts of the Sangeet Nataka tradition which Alekar and Marathi theatre is so steeped in. Right from the start there is no nonsense about an era whose time has come and gone, even as the playwright cuts through the fabrication of a nostalgic realist fable of an unidentifiable beginning shrouded in mystery.

In a superb passage, Begum Barve (Chandrakant Kale) yearns to be the next Balgandharva. Begum Barve cherishes the shawl that the star once gave him, it is the only real remnant in a transitory world of fake opulence, applause, razzmatazz.

Alekar stays true to the flavour of Sangeet Nataka. But what could be yet another humdrum play about the goode olde days, is saved by Alekar's unusual documenting of an alternative version. This attention to the small details of Begum Barve's life makes the play a trifle daunting, but the rewards are great. Structured in many ways around places as well as periods, the audience and reader is treated not only to insightful reflection on the Sangeet Nataka, but also an insight into Pune subterranean life – including an exemplary account of the feudalism, and the rot in our society. Herein lie the energy and ambiguity that make Alekar's writing so compelling. The audience is being exhorted to an act of imagination, to abandon passivity and dare to invent a new kind of reality.

Alekar says: "I have always been asked about the element of the wonderful or the fantastic. We don’t ask such questions about Hindi films because it is taken for granted. Realistic plays don’t get asked about their realism. In fact, popular Hindi movies are reviewed by their fantastic content. Fantasy has been so well incorporated in this medium that the average audience readily expects it."

The playwright explains, "Begum Barve was the outcome of three different trajectories of memory. The first recollection was of a beggar couple – one of them extremely obedient and loyal to the other who suffered from a handicap. They stayed under the staircase of a chawl which my friend owned, where I used to go to study for my M Sc. The other memory was of an extremely feminine, male incense stick vendor. It seems he was an actor who had played secondary female parts in old plays. Anyway his mannerisms, his story and his whole persona was firmly impressed in my mind. The third recollection is of the time when my friends, both newly married had taken up their jobs in the same medical college where I worked. It so happened that another appointment was made for the same post and since there were only two vacancies, the service of one of my friends would be terminated. This was obviously a mistake and the problem was resolved in 48 hours, but the extreme tension my friends were subject to, to which I was a witness, made a deep impact on me. I visualised these three incidents and they lead me towards Begum Barve. The play grew in bits and pieces, and as things came to my mind I wrote them into the play."

The play ends in bitter-sweet equivocation. Shanta Gokhale's tries to triumph over the difficulties of translating the play into an alien language with its alien culture, English. Alekar's text has, as a rule, stood in defiance to translations. The Gujarati version Master Fulmani, lived to tell a tale but it did its things rather disappointingly by dumbifying the gloom and even the pathetic image of Begum Barve yearning for an adolescent virginal performance. The cathartic expletives became celebratory, the funereal became fun.

The stark, almost anti-theatre original production must be watched, and the play read, simply because of the dignity of the thing. And this is the residue at the core of Alekar's Begum Barve and Mahanirvan, a sense of the unswerving endurance and resilience of the ordinary Punekar as their social hopes repeatedly fall foul of grim reality.

Even as one re-reads these two plays on a day the Government rather belatedly bestows an honour, one thought resonates through the head: Alekar saab, we wait, humbly, for one more Begum Barve or Mahanirvan from the "retired teacher since January 31 of 2009".

(This piece is based on a review which appeared in Harmony magazine; coinciding with the staging of Begum Barve and Mahanirvan)